The re vuci Palermu: Giana Guiana 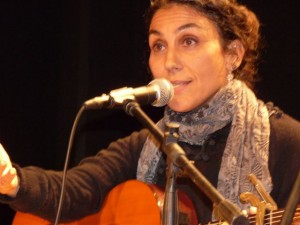 The specific interest in singing, cultivated since childhood, is thus renewed by meeting the Anthropology Theatre and is directed more and more towards the traditional singing, on the one hand, and the original composition, other. Under purely vocal, have left their mark above the vocal improvisation workshops led by Miriam Palma, laboratories Luca Mingarelli, the laboratory of art of the word (anthroposophic school) conducted by Maurizio Li Vigni, the stage of harmonic singing (Tuva) directed by Andrea De Luca, i seminary in tone yoga (Yoga of Sound) edited by Maytilli Devi, polyphonic singing sessions led by Letizia Manzella, seminars on the songs from the oral tradition led by Giovanna Marini and Xavier Rebut. Thanks to research carried out at the ethnomusicological Folkstudio of Palermo, at the Nastroteca of the Sicilian Region and directly in the field, has collected a repertoire of songs Mediterranean, in particular Sicily and made arrangements for voice and guitar, remaining in the tradition.

From 2002 carries around his songs, on which it is expressed the musician, songwriter and performer of folk songs Giovanna Marini: ”his voice is beautiful, the pieces well, all very nice… I like the arrangements so sober, never overload, but freeing up the voice because that is the important part of the popular piece ..” Also from 2002 performs with the actress Lia agrigentina Rocco in-concert recitals: “The female figures in the literature of Sicily” and “And she became a pillar of salt” the number of women in the three monotheistic religions. In 2005 collaborates with the “Museo delle Marionette Antonio Pasqualino” in the recovery of the melodic lines of two arias of the Opera dei Pupi Catania.

From 2006 collaborates with Bruna Perraro, forming the duo "Todo Cambia", which offers a repertoire of Italian regional songs, Latin American songs and original compositions in Italian. In 2007 participate in the second edition of "Vucciria Festival" in Palermo (www.vucciria.org), the third edition of “Borgoinfesta – rhythms and songs from the Mediterranean "- a City Agne (The), the fourth edition of "Amor Mediterranean" in Caltabellotta (By). Since the end of 2007 works in Milan with Mondorchestra, with Toti Pumpo and Christian Sgarella. In 2008 participates in the "Project Portraits of the Artist", five documentaries and a route in memory in Sicily, as the composer of the song dedicated to the puppeteer Ignazio Puglisi, song used as the soundtrack of the documentary on. Is involved in the project by Alessandro Orlando Graziano of a cd-tribute to Angelo Branduardi, "Take the second apple", proposing a revision in the dialect of the song "The carousel". Take part in the fourth edition of ”Borgoinfesta Festival” a City Agne (The), the fifth edition of "Premio Pino Veneziano" in Selinunte, the fifth edition of "Amor Mediterranean" in Caltabellotta. In 2009 participate in the fifth edition of Borgoinfesta Festival in Borgagne, produces the album "'A carousel", began working with the publisher Salvatore Coppola. In 2010 up the track “The flight” published by the label Music Zone, collaborated in Italy with cellist Ramashanty Hat, in Sweden with bassist and guitarist Anders Pettersson Sten Rönbeck. Nell'estate the 2010 was invited to sing by Angelo Branduardi ” 'A carousel” during a stop on his tour in Sicily.