The birth of Orlando 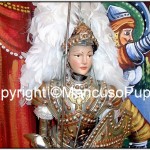 Di and with Enzo Mancuso and
Theatre Company Charlemagne Palermo

Milone has managed to escape by jumping into the sea from a furious storm; wandering in strange lands encounters an African soldier and calling himself Cavalier Bane arrives at the court of Emperor Agolante and helps his army to subdue King Salatiello in victorious battles in the lands of Libya. Named for its value capitan general, Milone meets a French soldier, recognizing that, reveals the true identity. Agolante does jail Milone. Sentenced to death after furious battles is saved from the gallows by Ruggiero Risa, his pupil weapons and riding together fleeing African lands.

Undisputed heir and last descendant of the historic family, that the ancient art of the work of puppets made the history of Palermo since the Twenties, Enzo Mancuso is now considered one of the youngest puppeteers Palermo, capable of renewing the tradition without detracting, but rather bringing it to a very high level of storytelling and acting.

Growing up behind the scenes of the theaters, began at an early age by working actively to the shows of the father, which has handed down the passion and the secrets necessary to the perpetuation of the difficult job of puppeteer.

Teatro Carlo Magno, by Mary College at Old Village,17
(behind the President Hotel - Port of Palermo area)
N.B. The performances may vary due to circumstances beyond.